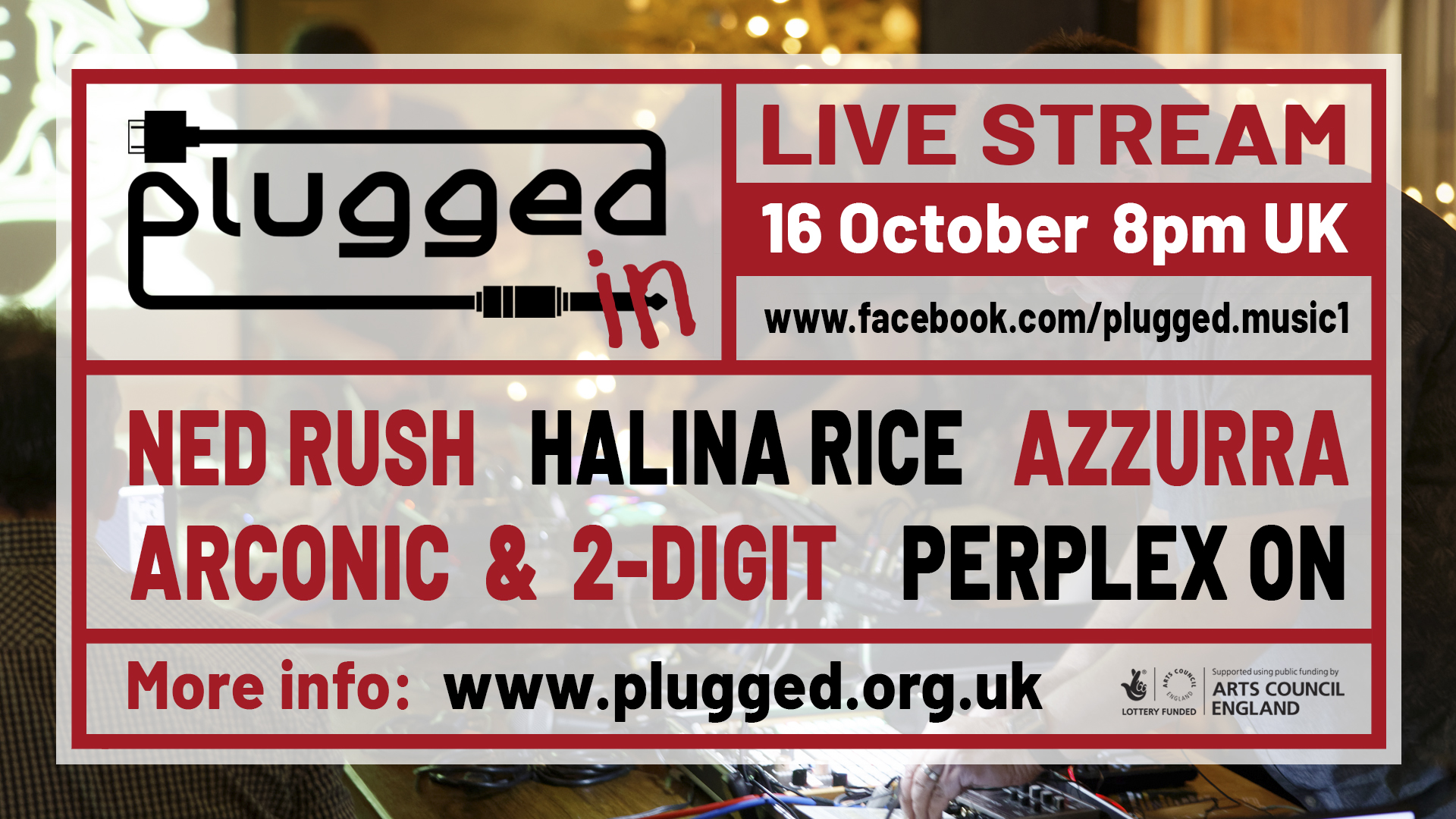 Friday 16th October  –  Tune in online at 8pm sharp for another edition of Plugged IN and a whole host of great live electronic music and visuals…
www.facebook.com/plugged.music1

NED RUSH
Ned Rush (aka rude_NHS) is a composer, producer, musician, sound designer and developer as well as visual artist and video editor. Although releasing music online since 2000, he rose to notoriety in 2009 through his eccentric YouTube channel making videos about music tech. He continues to release music, sounds and exclusively developers Max For Live devices with Isotonik Studios that focus on more abstract concepts of performance, sound design and animation.
https://linktr.ee/nedrush

PERPLEX ON
Creating waves in the IOS Music Making community, Perplex On is a new media artist from Munich. Between Ambient and IDM, audiovisual glitches and floating melancholy, sounds of raindrops leaking through the cracks in the city, looking for the jumps to reality where dark psychedelic replaces the omnipresent pathos. The result is on the one hand black metal for digital sleepwalkers, but on the other hand dream pop for existentialists.
www.perplexon.com

AZZURA
Inspired by essences and pure forms, Azzurra began writing music on her own in 2015. The same year she moved to Berlin and released the single Before Your Lies and her first EP Where Are We Going, produced by film composer Federico Ferrandina, getting the attention of many international music blogs. In 2019, with multi-Grammy Awards winner Sadaharu Yagi and Federico Ferrandina, she wrote the World Environment Day and SDGs theme song We Are Walking On for the United Nations. Her debut album, Underlight was released this year.
www.azzurramusicofficial.com

ARCONIC with 2-Digit Visuals
Driven by live improvisation and experimentation, Arconic is the new solo project of Plugged co-founder, Rob Parton. Combining structured and randomised sequences along with improvised responses the project takes inspiration from the early sounds of rave, electronica, ambient techno, bass and breaks. The live performance will be accompanied by 2-Digit, who has been creating and performing visuals for music events and festivals for over a decade.
+
Much more audio and visual treats to be announced.

PLUGGED is a collaboration between Stow-Lab and Addictive TV.
Supported using public funding by the National Lottery through Arts Council England.