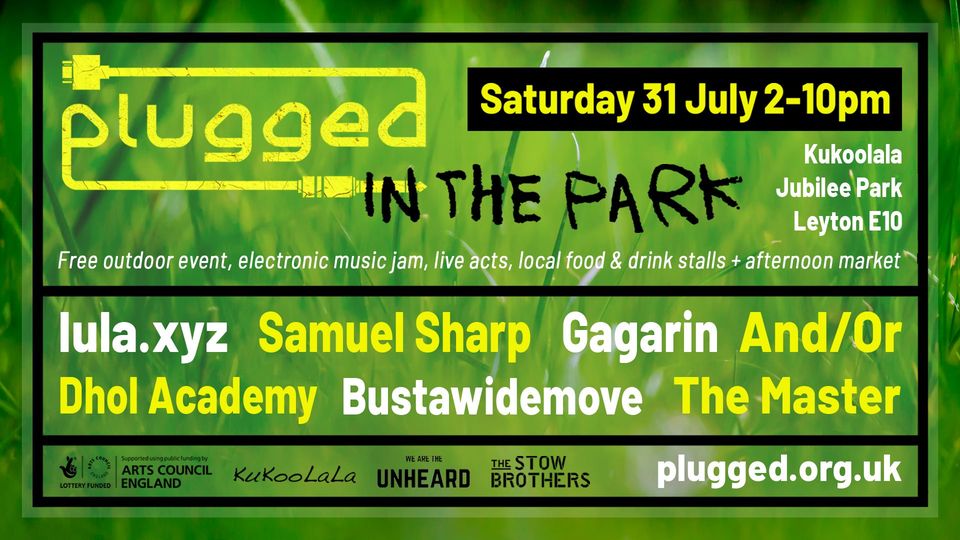 Following our series of live streamed events, we’re pleased to announce Plugged in the Park, an outdoor family-friendly event in the grounds of east London’s Kukoolala Café in Leyton. Live music, an open electronic music jam, local food and drink stalls, plus an afternoon market.

LULA.XYZ
With the soulful tone of her Ethiopian Habesha roots, Lula Mebrahtu aka lula.xyz, has been performing with creative technologies for the past 6 years, particularly the MiMu gestural midi-controller gloves, brainchild of Imogen Heap. Lula.xyz has been instrumental in the use of the gloves with her live performances, she’s also a winner of the PRS Women Make Music Awards and has presented her work with a TEDx talk. Her debut EP ‘My Hands 2 UR Ears’ is a carefully constructed mosaic that pays homage to a creative process and musical ancestry that take you on a journey from the jazzy streets of east London to New Orleans via a ‘doo-wop’ road trip to Mars.
www.lulamebrahtu.com

SAMUEL SHARP
A composer, saxophonist and producer based in London who creates innovative soundscapes blurring the lines between minimalist classical, jazz and electronic music. Sharp has performed with the likes of Hackney Colliery Band, Augustines, Hollie McNish, Introducing Live (DJ Shadow Project) and Stephen Crowe. As a session musician and producer his collaboration and remix portfolio includes artists as diverse as Phil Selway (Radiohead), Uno Helmersson (The Bridge), Roska, Laura Mvula, and Ben Taylor. You’ll find the bulk of his work to date under the artist name Lossy, and so the switch to using his real name truly represents a new chapter in his career.
www.samuelsharpmusic.com

GAGARIN
The solo instrumental project of musician Graham ‘Dids’ Dowdall aka Gagarin, explores a moody, melodic, subtle beats style electronica blending field recordings alongside grooves and evocative atmospheres. A prolific artist preferring to work on the outer edges of the music industry for over 30 years, he’s worked with the likes of both Nico and John Cale amongst others and has released several albums on his own Geo imprint. His music doesn’t adhere to any particular genre or scene and his latest album, ‘The Great North Wood’, follows on from his acclaimed ‘Corvid’ which received repeated airplay on BBC 6 music and BBC Radio 3.
www.gagarin.org.uk

DHOL ACADEMY
The Dhol Academy, headed by Jasdeep Bamrah, is a community group in Forest Gate that teaches young people to play dhol – the double-headed drum used throughout the Indian subcontinent. Founded in the 1980s as an outlet for young adults and children, the academy has nurtured thousands of talented drummers over the years, mainly from the Asian community. They’ve performed across the country, especially at Mela festivals that celebrate Asian culture, food and music. In 2019, they closed the London Mela with an audiovisual show designed in collaboration with digital artists Addictive TV.
www.dholacademy.com

BUSTAWIDEMOVE
Junglist soldier and DJ, Bustawidemove is a festival stalwart with residencies at Glastonbury (The Common), Boomtown Fair (Renegade Street Rave), Shambala (Roots Yard) and Sunrise festivals as well as Club Momo in Frome and a regular at Jungle Splash in London. Busta has been a long-term resident DJ on Originuk.net with the twice monthly Junglist luncheon show, which you can catch on the first and third Saturday of the month between 12 and 2 PM. He has also released music through Uncommon Records and his own label Widedubz including remixes for The Specials and General Roots.
www.widedubz.co.uk

AND/OR
Born out of improvised electronic music jams, live act And/Or (Julius Aitken and Rob Parton) perform part composed/part improvised music spanning an eclectic mix of ambient electronica, trip hop, breaks, and techno. They have performed together at numerous events including at MiniFest and on the recent global livestream for international music conference NAMM. Releases include their most recent single Moods, Progress and their ep, Satellites.
www.facebook.com/AndOr.Sounds

THE MASTER
The Master is a DJ and music producer with a wide-ranging background in dance music and electronica. Before the pandemic, he regularly attended AV collaborations around London and took part in live Ableton Link improvisations for StowLab, Plugged and CRUX. During lockdown, The Master wrote four new electronica tracks, Apolune, Pandemic, Perigee and Apsis with accompanying music videos created by visual artist, Alien101. The Master’s DJ style is open-minded and eclectic without sticking too rigidly to musical genres.
https://soundcloud.com/djthemajor

This free event is made possible with support from Arts Council England. We kindly ask attendees to strictly respect the Government’s COVID recommendations and regulations. Please join this event and our Facebook group to know about any updates.